We offer MAMMOGRAPHY services 5 days a week (M-F) AND the 1st and 3rd Saturday's of every month at Annapolis (Defense Hwy), and Easton locations. #gotmymammo

WHAT IS NUCLEAR MEDICINE 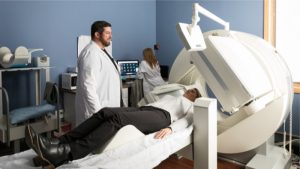 Nuclear medicine is a medical specialty that uses tracers to assess bodily functions and to diagnose and treat disease.  Specially designed cameras allow doctors to track the path of these radioactive tracers.  Single Photon Emission Computer Tomography or SPECT and Positron Emission Tomography or PET scans are the two most common imaging modalities in nuclear medicine.

SPECT imaging instruments provide three-dimensional (tomographic) images of the distribution of the tracer molecules that have been introduced into the patient’s body.  The 3D images are computer generated from large number of projection images of the body recorded at different angles.

SPECT imagers have gamma camera detectors that can detect the gamma ray emissions from the tracers that have been injected into the patient.  Gamma rays are a form of light that moves at a different wavelength than visible light.  The cameras are mounted on a rotating gantry that allows the detectors to be moved in a tight circle around a patient who is lying motionless on a pallet.

WHAT TO EXPECT WHEN YOU HAVE A NUCLEAR MEDICINE SCAN

Nuclear scans use radioactive substances to see structures and functions inside your body.  They use a special camera that detects radioactivity.

Before the test, you receive a small amount of tracer that has no adverse side effects. Tracers are administered both orally and intravenously.  You will be asked to lie still on a table while the camera takes images.  Most scans take 20 to 45 minutes; however, depending on the type of Nuclear medicine exam it can take from 45min – 4 hours to complete the exam.

A specialized scheduler will give you specific preparation instructions and time commitments at the time of scheduling.

WHEN IS NUCLEAR MEDICINE USED

Nuclear scans can help doctors diagnose many conditions, including cancers, injuries, and infections.  They can also show how organs like your heart, lungs, gallbladder, brain, and kidneys are functioning. 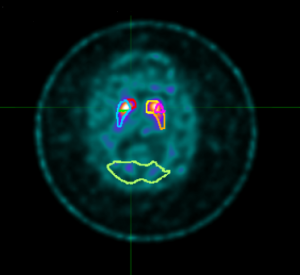 A DatSCAN is an imaging test that helps in the diagnoses of Parkinson’s disease. In this test, a radioactive tracer also known as DaTscan, is injected into the blood, where it circulates around the body and makes its way into the brain. It attaches itself to the dopamine transporter, a molecule found on dopamine neurons. Several hours after the tracer has been injected, special imaging equipment scans the head to detect the presence of DaTscan.